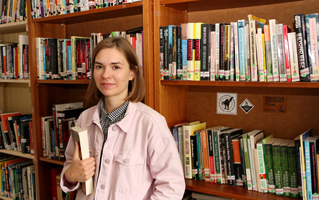 Anna Marta Marjankowska is an elected board member of Efling, since last spring. She is 26 years old, born in Central Poland, but moved to Kraków in 2010, to study and work. There, she worked in cultural institutions, museums and galleries, producing film and music festivals, as well as studying critical studies and cultural management. Her interests were in creativity, the nature of work and the conditions of working people. The level of precarity in Poland doesn’t allow people to plan even the near future and that made Anna Marta decide to move to Iceland, where her friends were living. Now she demands a social change and dedicates a few next years of her life to make it happen.Anna Marta is still connected with public and cultural life in Poland, writes interviews and book reviews for a big magazine. Being active in my language sphere is still a huge part of my identity, she says. In June, students from Polish Universities went on a strike, in few cities they managed to occupy university’s buildings. I was glad to join them and make my speech about the importance of solidarity and courage to start the strike, which was read during the protests in Kraków.In her cultural management studies and critical theory studies at Jagiellonian University, Anna Marta drew various conclusions from looking at modern working conditions starting from the research in the art field. That made me really depressed, to be honest, describing the situation of workers in creative industries I could clearly see my future as a person with huge symbolical capital with no chance to plan even the closest future. That is the main reason I left Poland.I also realized that I would not be able to do what I wanted in Poland in the next years, because of the political and social situation. This uncertain situation is getting more serious in the perspective of radicalization of decisions and behavior of Polish government including changes in the political system, restricting women’s’ rights, lack of protection of disabled people and their families, unacceptable migrant and refugees policy. With this background, I have a certain political vision and a clear need for stability and protection from the state I’m living in.A new opportunityAnna Marta decided to come to Iceland because one of her best friends was here. Hearing the stories from her I had the feeling, that Iceland will give me the level of safety I need and opportunities to use my skills and knowledge in the long term. She came to Iceland in October 2016, started to work in a guesthouse for two and a half months, then in a hotel for six months, after that for a cleaning company and now in a restaurant. At the beginning of my stay here, the employers have taken advantage of me not knowing my rights or any institution where I can go and ask for assistance and directions. I didn’t know about the role of working unions in Iceland. My first employers made me sign papers saying that I renounce two weeks of notice after being fired, that are bound in wage agreements, so they didn’t have to pay me the money that I legally should get. I didn’t know it was illegal. What can a young woman do, sitting against two adult men, saying that this is the way things are in Iceland?She says that in some respects we can compare the situation of Polish workers in Iceland to the situation of Ukrainian workers in Poland. It is the same relation of money and economical difference and the ways people are treated. Polish migration is the biggest of many western countries. We have to use this international experience, learn our rights and treat foreigners better in our homeland.Equal wages for same jobs 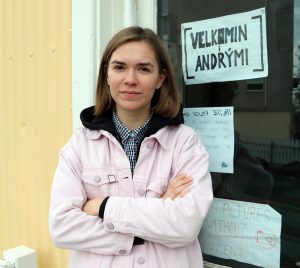 Anna says she realized, after living here for several months, that Iceland is not a ‘socialist paradise’. Unions haven’t been strong enough to resist shady practices of employers and she says that she has experienced a certain double-standard in treatment in the workplace and payments between Icelanders and foreigners.  We cannot allow it to happen, that people get different pay for the same type of work, just because they are foreigners. We have to speak about it openly.She came to know about Efling through people taking part in grassroots activities in radical social center Andrými and one thing led to another. It also matters, that her mother is a labour lawyer at the Polish Inspectorate of Work, that handles various issues that are the tasks of trade unions in Iceland. I haven’t been active in this field from the practical, political side in Poland, I was a researcher of modern working conditions, still I was following the activity of OZZ Inicjatywa Pracownicza (Workers’ Initiative), Committee for a Workers’ International, Partia Razem and Państwowa Inspekcja Pracy (National Inspectorate of Work) – in Poland we have many interesting practices in this field. Work is the main category that organizes our lives, we cannot escape it.New wage agreement negotiations are ahead. It is certainly important, Anna says, but it is no less serious that there is a lot of people not even getting paid the minimum wage. For me, it is of major importance to connect the people, let them know where they can get information and to strengthen the system of union representatives in the workplaces. Every company that is hiring more than five people should have a trúnaðarmaður (Union representative), that knows the law, checks if everybody has a contract, know how to deal with mobbing or any discrimination. This way all the people entering the labour market, foreigners but also young Icelanders will have equal access to basic information about their working conditions. From the other perspective – we have to say loudly – it is a shame to pay the minimum wage to a worker who is producing the income of the company and to pay less than the minimum (often hidden in fixed hourly pay) – it’s just a crime.It is important that now we have people on Efling’s board coming from various backgrounds and with more diverse experience than before. This makes it possible to approach a huge part of union members of foreign origin. If people realize their actual situation and how it can change with strong solidarity, then they are willing to make an effort to claim what belongs to them, in terms of salaries and rights.Wants to contributeThe difference in monthly income between Iceland and other countries is very high. If we try to quickly compare it with Polish conditions, people here are earning six times more when costs of living are only three times higher, if we count renting a room and modest living. You can save a lot working few months in Iceland. The situation changes if the person is here with a family, children that have to go to kindergarten or school, and after-school classes, needs to rent the whole apartment or think about buying the house. This pressure makes workers vulnerable to many malpractices from employers. It is important to build consensus within the union, connect people to it so that they see that they can get advice and support when dealing with employers. I have great hope that step by step we can improve the situation of workers, it will have a strong, long-term impact. I want us to focus on building up the union itself, to make it a better tool in the struggle. Even though the time since the newly elected board took over is not long, Anna Marta feels some things have been gained already. They have been in contact with a great number of young people in the union, and there seems to be an awakening. What I felt was uncomfortable in the election campaign, was to meet people from Central and Eastern Europe that said they were not going to vote, they were better off than before coming to Iceland and they didn’t want to rock the boat. We want to change this, translate the basic labor law, so everybody will be conscious of it. Learning Icelandic is important but we cannot expect that people that are working for 12 hours a day will have the energy to go on courses and learn at home. Still, we want to make all the workers feel needed and appreciated in this country, we cannot leave them alone.There is a lot to be done in Efling when I define my target: new people on the working market, foreigners and young Icelanders, people hired in basic jobs, workers in hospitality, workers of care. It is going to be a long and hard battle, but it’s worth it, we all need this revolution. Anna is planning to combine this two years term on the board with Ph.D. studies in Iceland and soon make her Icelandic fluent.