Coordinated action in the South-West of Iceland under preparation 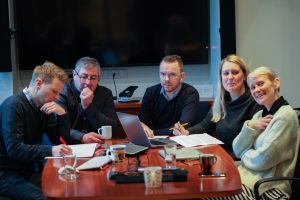 The presidents of the Union of Workers and Fishermen in and around Keflavík (Verkalýðs- og sjómannafélag Keflavíkur og nágrennis – VSFK), the Union of Grindavík (Verkalýðsfélag Grindavíkur), VR and Efling – union met for a planning meeting this morning where coordinated strike actions in the South-West of the country were discussed. The areas of coverage of these unions are contiguous and overlap in certain places. There the centers of many of the country’s main industries are to be found, for instance the debarkation operations of the large shipping companies and air transport, including air cargo. Also, there is the country’s biggest tourist attraction, the Blue Lagoon. The presidents of the unions agreed that actions needed to be taken as soon as possible.Guðbjörg Kristmundsdóttir, who recently took over as president of VSFK, spoke highly of the meeting. “I see it as essential that the unions who operate in the same part of the country show solidarity. It is largely one and the same working area and the wages that workers in the area get are interrelated. Also, we are beginning to see that it is necessary to coordinate strike actions to awaken our negotiating counterparties from their sleep,” said Guðbjörg.Sólveig Anna Jónsdóttir, president of Efling, said that there is great strength in coordinating actions among the unions in the South-West of Iceland: “The compulsive procrastination of the Confederation of Icelandic Enterprise (SA) is becoming intolerable. The first pretext that they used to avoid discussing the wage-item with us was their ideas for a change in working hours. Now we see Wow Air. What next? I find it very irresponsible for SA to drag their feet for months. Is it too much to ask that we begin discussing our wage-demands, now that there are six months since we put forth our demands and strike-actions have been going on for over two weeks?”Hörður Guðbrandsson, president of VLFG, pointed out that certain employers in the area have made a practice of dispersing union-membership in their work-places. “In the Blue Lagoon, for example, employees are pretty much evenly distributed between Efling, VSFK and my union. Is this done to make strike-actions more difficult? Anyway, with solidarity and coordination, the unions can achieve the intended effect of the actions. I welcome the collaboration of these unions.”The Store- and Office-worker’s Union in Suðurnes (Verslunarmannafélag Suðurnesja) recently voted to merge with VR and the merger will likely be accepted by the general meeting of VR this evening. Ragnar Þór Ingólfsson pointed out that there is strength in the merger of the unions and the expansion of the area of coverage. “The statements of the representatives of the tourist-industry and other special interests to the effect that it is unwise to increase wages will of course be met with a forceful response. The Icelandic economy can provide decent wages for the people, that is a fair demand. The collaboration of the unions strengthens my belief that an acceptable result will be achieved quite soon,” said Ragnar Þór.Vilhjálmur Birgisson, president of Verkalýðsfélag Akraness, said that he has high hopes for the broadened collaboration on actions. “Such a coordinated effort is bound to finally bring SA to the table,” said Vilhjálmur. He said that preparations for actions in his area of coverage have begun and that it will be the subject of the union’s general meeting tomorrow.