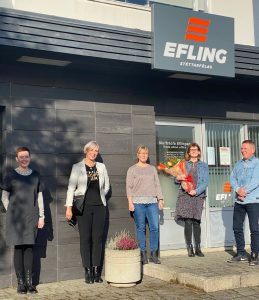 At a small ceremony yesterday, Jóna S Gestsdóttir was said farewell after a successful job at Efling. She was thanked for her work for the union and the collaboration over the years. Jóna worked as a service representative at Efling’s office in Hveragerði since the trade union Boðinn and Efling merged at the beginning of 2009, but she had previously worked for Boðinn for many years. Jóna was a great professional and a great co-worker and Berglind Rós Gunnarsdóttir, head of the office and human resources department, brought her a goodbye gift from the union and the staff members.