Christmas spirit all round in this year’s last DropInn, which will be streamed live on Thursday, December 3, at 10am. This week, we’ll get four diverse authors to read us chapters from their books. 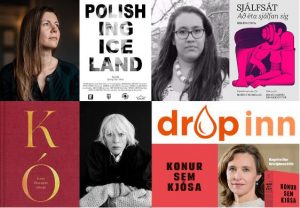 Ewa Marcinek reads from her Polishing Iceland. It’s her first work, soon to be published. Earlier this year, a play based on it ran in Tjarnarbíó.Helen Cova reads from her Sjálfsát – Að éta sjálfan sig, her second book. She has previously authored the children’s book Snúlla finnst gott að vera einn.Kristín Ómarsdóttir reads from a new compendium of poetry, Kristín Ómarsdóttir ljóðasafn, which she has just brought out. It contains her eight volumes of previously published poetry which have been out of print for some time.Konur sem kjósa: aldarsaga is a book about a century of women voting in Iceland. Ragnheiður Kristjánsdóttir, who authored the book along with Erla Hulda Halldórsdóttir, Kristín Svava Tómasdóttir and Þorgerður H. Þorvaldsdóttir reads from it.Make a warm cup of cocoa, have some gingerbread and enjoy the reading! The event will be in both Icelandic and English with subtitles in English/Icelandic.The event will be facilitated by Efling staffer Þórunn Hafstað.